Elizabeth "Lizzie" Liddell was the eldest child of Arthur Liddell and Mrs. Liddell and the older sister of Alice Liddell.

At the age of eighteen, Lizzie was raped and killed in the fire that also killed her parents and burned down their family home in Oxford. 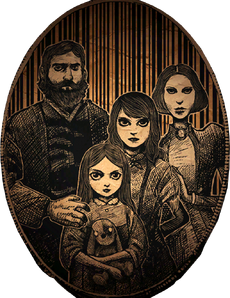 Lizzie was likely born in 1845, and because of her father's privileged job as a university dean, she lived a comfortable life with her family in Oxford, and was well-educated, having been taught French and music with Alice by their Nanny.

At the age of eighteen, Lizzie became the object of desire for Angus Bumby, who was one of her father's undergraduates at the time. Although Lizzie did not appreciate his advances, and disliked him entirely, Bumby became obsessed with her, believing she was just playing hard to get and pretending she was disinterested, and he would stalk her. One time, Bumby even entered the ladies' restroom at the London Waterloo station to follow her. Disgusted by him, Lizzie told Alice about the things Bumby did to her, and told their father not to invite him around to their house again.[2]

One night, infuriated by what he saw as Lizzie "teasing" him, Bumby broke into the Liddell's house and raped her in her bedroom. He then may have murdered her directly after this, but the exact details on when and how Bumby murdered her are unclear. Regardless, Bumby locked her bedroom door from the outside.[3] He kept Lizzie's door key with him as a memento of her and would later use it as a tool to hypnotize his patients.[2]

Alice saw Bumby in the hallway outside her room, but her mind imagined Bumby as a centaur, and she believed that the noises from Lizzie's room only meant that Lizzie was talking in her sleep that night, as her mind either would not, or could not, accept the dark truth. Bumby then used an oil lamp from upstairs to set the house on fire, in an attempt to cover up his crime.[2] Only Alice escaped the blaze alive.[1]

While Alice was being treated at Littlemore Infirmary, Lizzie's body,[1] despite being unharmed in the fire,[2] was stored in an ice locker along with her parents' bodies "in the likelihood that the whole family will be expeditiously interred at the same time."[1]

Twelve years after the fire, Alice began to realize that Lizzie's room was further away from the fire than her own, and that she disliked locked doors, thus she would not have locked her bedroom door herself. Alice also believed that Lizzie would have been smart enough to jump out of her window to escape the fire, suggesting she was either dead or incapacitated before the fire reached upstairs. According to Wilton J. Radcliffe, after identifying the bodies at the Oxford Morgue, Lizzie's was the only one not burnt by the flames.

After working out that Bumby was behind the death of her family,[2] she also realized that he raped Lizzie before killing her,[3] and had been using Lizzie's key to hypnotize his patients, she confronted him before taking back Lizzie's key and pushing him in front of an oncoming train, killing him to avenge her family.[4]

In the Liddell family portrait, Lizzie bore a strong resemblance to the nineteen-year-old Alice Liddell. She had shoulder-length dark wavy hair that has bangs hanging on the left side, an oval face, large eyes, pale skin and donned a long-sleeved shirt and a skirt held up with suspenders. It was likely she had green eyes like her sister. The Queen of Hearts is at one point addressed as "Lizzie" by Alice, possibly implying a resemblance to her deceased sister.

Through Alice's memories, Elizabeth appeared to be a friendly, sharp-minded girl who was much more adventurous than Alice when they were growing up. She was a very loving person, and was dearly loved in return. She had a deep relationship with her little sister, even confiding in her about Bumby's sexual advances towards her. However, though she loved Alice deeply, the age gap between them was too great for her to be much of a playmate to her little sister.

Lizzie also possessed a mischievous, slightly wicked side to her; she had tried smoking a cigarette at least once and revealed to her sister that it was disgusting, but still wanted to try a clay pipe. She also knew how to sneak out while grounded using a tree branch and trellis. She also had a generally low opinion of the undergraduates that tried to impress her father, calling them a "bunch of toadies."

Retrieved from "https://alice.fandom.com/wiki/Lizzie_Liddell?oldid=59704"
Community content is available under CC-BY-SA unless otherwise noted.